How long have you been at Marriott Support Services, and what is your role?

I have been working for Marriott Support Services for around four years. My role is as a Support Coordinator within the Community Services team.

How did you get involved with Marriott Support Services?

The story of how I became involved with Marriott was quite funny really. My son Ben started using Marriott Support Services in 2014. At this time, I was working and studying, I started looking for work in the disability and advocacy field. Around the same time, a local newspaper did a story on the NDIS, and Marriott chose Ben and I to speak with the reporter. It was a very sweet article. I think it was titled “mum hopes NDIS will support her son to find love”. It was such a promising time of hope. This new NDIS scheme was going to give Ben and I opportunities we had never had before. This has become a reality for us and for many of the families that we support here at Marriott. 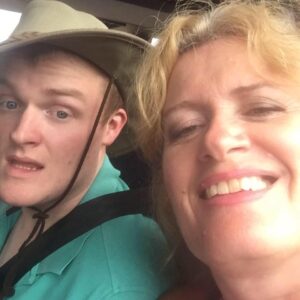 Have you had any other roles at Marriott?

My first role involved transitioning people with disability over to NDIS funded supports. It was an amazing time. Marriott organised information sessions for families to let them know about the new scheme. The NDIS funded support system was completely different from anything we had ever experienced before. The best part of transitioning people was meeting everyone in the organisation and getting to know them and their families.

At first this was simple, as certain sections of the community transitioned before others. However, once it became overwhelming, I had other team members assisting me. We transitioned over 200 people with disability onto NDIS funded supports within 18 months, which was a huge success for everyone at Marriott.

What does a typical day look like for you?

A typical day is checking into the office and catching up with the other support coordinators who make up the Client Services team at Marriott. I then get ready for the appointments for the day, usually meeting with individuals or carers to continue to ensure the supports are going well.

There are also phone calls to follow up and emails to answer, which directly relate to participants and their NDIS supports. Depending on the appointments that day, I may go over to Marriott’s Cheltenham site, if it’s a larger appointment with five or six people to accommodate. Once over at Cheltenham, I will generally say hello to some of the supported employees, as it’s always a good opportunity to catch up with anybody that has anything they would like to discuss.

If I stay at McKinnon and do appointments, I can also catch up with the community-based day program participants. This may be a case of having a quick word or arranging for an appointment later in the day, where we can sit down and address any concerns in terms of their funding and supports. The role can be very challenging, as people’s lives and situations can change dramatically from one day to the next. Part of the day may also include calls from NDIS planners organising or following up review meetings.

What do you find most rewarding about your role?

I think the most rewarding part of my role and I feel other support coordinators would also agree, is the relationships we form with people with disability and their carers. Navigating through the disability sector using an NDIS plan can be daunting and confusing, and sometimes complex. However, I believe that part of our job is to take as much of the anxiety out of accessing NDIS funded supports as possible.

As a result of NDIS funding, I have seen great changes over the last four years. People who have always lived at home are now living independently in a share house in the community. People can have control over their supports and have more choice about how they want their life to look, and be supported to think about what life can look like in a way that perhaps was not possible before.

What advice would you give to someone thinking about becoming a Support Coordinator at Marriott?

For anyone interested in becoming a support coordinator at Marriott, I think it is important to remember that people with disability are at the centre of everything we do. The role is like being the captain of a ship, many things are required to ensure a plan is supportive and sustainable, including managing the budget.  However, our role is to support and challenge, but not to determine what is best for them. Respect is paramount, and our role is in collaboration between support coordinator and the people we support at Marriott.

Do you have a rewarding Client Story?

As a team, we have many stories of people having life-changing experiences because of their NDIS funding. An example of this is someone who has always lived at home with their family, but just last year, moved out independently to live in a shared house. It was amazing to see this transformation take place, as they were very anxious in the lead up to moving out. With developments in independent living arrangements, we linked the person to a provider and support workers in the home. As a result, this person now lives independently and has grown in confidence.

What challenges have you faced in your job in relation to the NDIS?

There are many. The NDIS allows people with disability to access a life more normal. This has been very successful and there are many good stories including my own son’s story of accessing supports, that he would not be able to access, other than through NDIS funding. The difficulty is the complicated processes and procedures to get appropriate funding in a plan, and once a plan has been approved, to ensure supports are promoting a better life. Our NDIS support coordination team is very resilient and tenacious. We work tirelessly to ensure people with disability get the best possible plans and access to services to support them with their life goals. I think the best quality of the team is our commitment and investment in NDIS participants and their accomplishments.